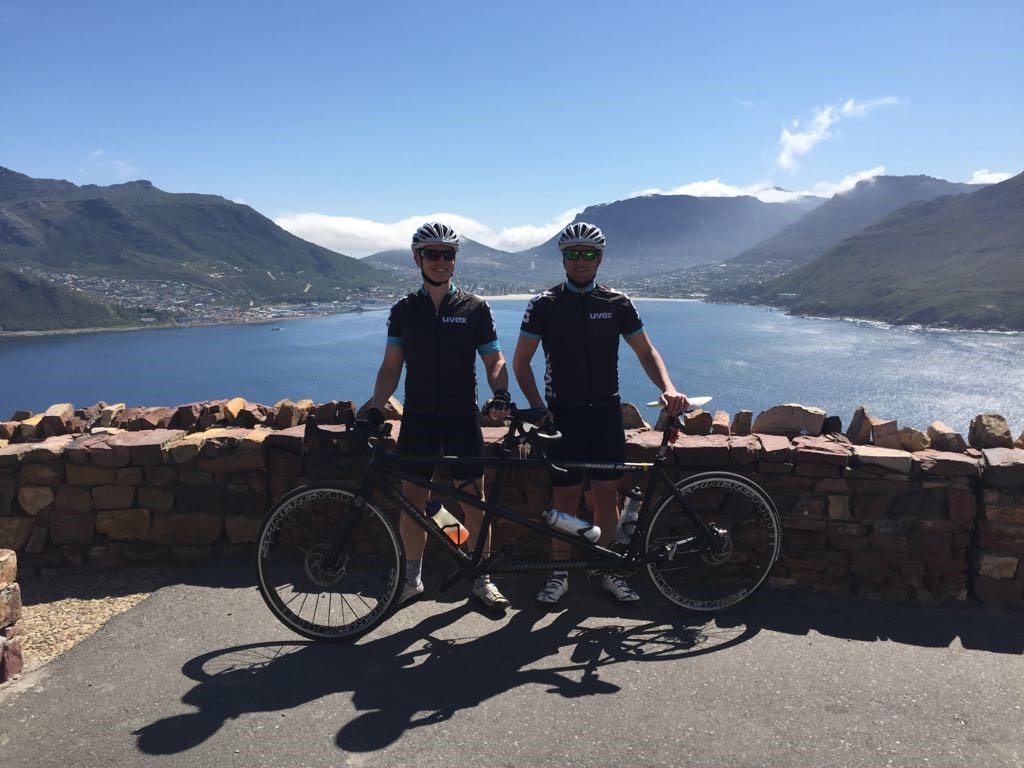 “The challenge is to complete the 2018 Coronation Double Century on a solo bike,” says Gavin Kilpatrick. Now, for anyone reading this, that would be a basic statement, but for an athlete with a visual impairment like Kilpatrick, it is a massive challenge. Kilpatrick has Stargardt Disease, a form of macular (central portion of the retina) degeneration which causes a large blind spot in the middle of one’s vision. “I have had the privilege of representing my country in three different sports – on a tandem; in a rowing boat and, recently guided by Michael Harris as a triathlete. All of these sports have been at the highest level of competition, but riding the Coronation Double Century this year would be about me accomplishing a personal goal,” he says.

Firstly, you are visually impaired as a result of Stargardt Disease, correct? Could you give us a brief background on that?
Stargardt Disease is the most common form of inherited juvenile macular degeneration caused by steady degeneration of photoreceptor cells in the central portion of the retina called the macula. This can be best described as a large blind spot right in the center of one’s vision. As a result, I am unable to drive a car, ride a mountain bike and even perform simple daily tasks like reading a text message or the price tag on a milk bottle. These are activities I have learned to accept but also found ways to overcome the challenges and improve quality of life as a person with a sight impairment.

This however has never stopped you from a long list of big achievements across various sports. Would you say something like CDC is one of the toughest challenges for you?
I have had the privilege of representing my country at three different sports, either on a tandem or in a rowing boat and recently guided by Michael Harris as a triathlete. All of these sports have been at the highest level of competition, but riding the Coronation Double Century this year would be about me accomplishing a personal goal that I have had my mind set on for some time. The challenge is to complete the 2018 CDC on a solo bike.

What are some of the challenges in terms of training and racing? That riders with more regular sight would perhaps not encounter or even consider?
One of life’s greatest gifts is the gift of sight. In the sport of cycling we rely so heavily on visual stimulus to ensure a safe ride. The ability to spot potholes (of which our roads have many), other road obstacles and traffic lights are factors a sighted person would take for granted but all of which could potentially lead to a crash. However with the assistance of trusted friends, I have completed a number of scenic rides which include a ride from JHB to Durban, JHB to Nelspruit and most recently a three day training camp in Mossel Bay where I safely navigated my way down Robinson Pass. Racing poses its own set of challenges because the high speeds and large bunches can be unpredictable but I have successfully completed a number of road races including the Cape Town Cycle Tour, Carnival City Classic and 94.7.

I have done a large volume of training on tandem as well as the Wattbike at the gym or on rollers. These training sessions come with their own challenges which include temperamental weather in the Cape, so coordinating rides can be tricky and also not being able to drive means popping into the gym on my way home from work becomes a planned outing instead of being part of a daily routine. With that said I have a passion for sport and I feel more at home riding a bicycle then I do walking down the street, I can feel the road through my equipment and it gives me a sense of independence and control.

What are your expectations of this year’s CDC?
The ‘Cee-Dee-Cee’ is one of my favourite events on the cycling calendar purely based on the team format and I have had the privilege of completing this testing 202km route as a team member on the Coronation Fund Managers sponsored COROTANDEM team for the past three years. 2018 will be a new adventure for me as I tackle the course on my solo bike for the first time with a new team of trusty guides who are all dedicated to steering me towards the finish line in a goal time of around seven hours. My mission is to compete alongside fellow sighted participants and while I accomplish a personal goal, I wish to inspire others to conquer their own personal challenges.