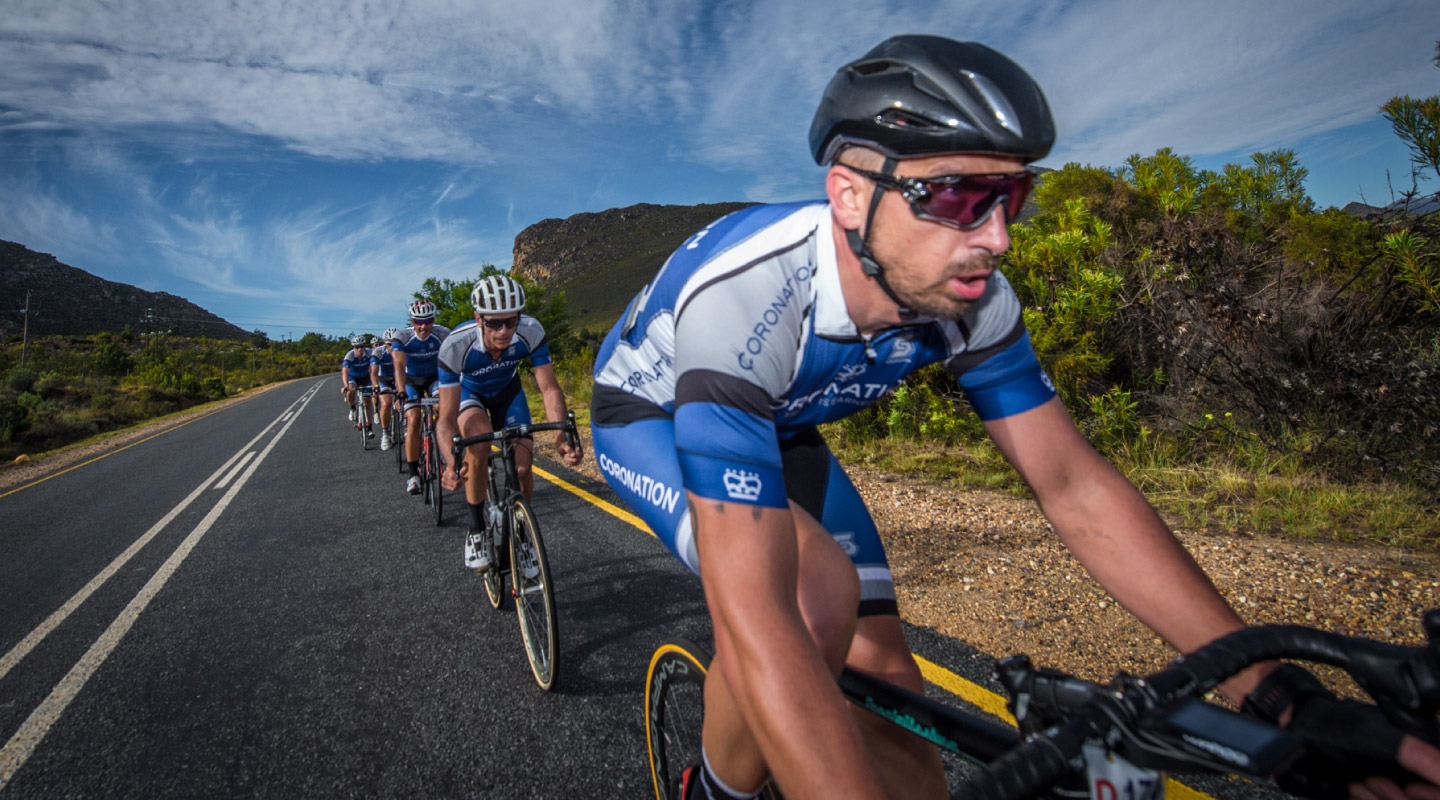 The Double Century is no Saturday morning coffee ride. You have to be fit and you have to be prepared. We speak to Johann le Roux, the only DC participant to have completed all the events, about what it takes to get his team over the finish line.

These two critical sessions involve hill climb and lactic threshold intervals. He tries to fit in a longer “almost tempo” outing on Fridays and then on Saturdays a longer ride between three and six hours. For the first month his weekend rides would be shorter “but at a slightly higher intensity”, but after that he pushes the duration up to five to six hours with climbs thrown in to the mix.

“The long rides are very important as they build endurance and the 1-tonner is an excellent pre-DC training ride to do with the team, as a test run for the race.”

Train as a team

Ultimately, this is a team event and while it’s not in the rule book, a lot of teams pride themselves on getting the whole team across the finish line together.

With this in mind, experienced DC riders offer the same sound counsel: wherever possible and whenever possible, train as a team. It is ultra-marathon riding and, like a good marriage, participants are well served getting to know the strengths and weaknesses of their team.

When it comes to hydration, Johann finds it vital to train with the same drinks available during the race to ensure his body and digestive system is prepared for what he’ll get on the day.

In the immediate build-up to the event, Johann’s approach has universal value — be well hydrated on the day. He begins to increase his fluid intake three days before; simultaneously he ups his pasta consumption and, “on the Wednesday I will have a huge piece of steak – it works for me!”

He emphasises the importance of “a good night’s sleep” on the eve of the event and then “a full, low GI breakfast two to three hours before the start” to be followed by a 750ml sports drink in the last hour.

In that final week Johann tapers his training, reducing intensity. “I do three rides of about an hour each with a few 15 to 20 second sprints at 70 to 80 percent intensity – to keep the body awake and the blood circulation going.” Like most riders he does a day-before ride “just to ensure my bike is ready.”

It’s a widely held opinion that weekend team training rides, starting at say 100kms and building up to the actual DC distance, are the most sensible way to go and it is not a terrible idea to use both heart-rate monitors and bicycle computers in the preparation. These enable team members to do their other training rides at the same level. Mid-week rides of at least 50kms are recommended in the “amateur” ranks, with a few shorter, more intense rides on either side.

Johann’s advice for the race itself is sage: for the first 150kms keep the team together with the slowest/weakest riders in front and on the flats ride single or double line formations with the stronger riders doing the longer stints. He tries to eat and drink every 15 minutes (jelly babies, banana bread and biltong) to maintain glucose levels.”

The water points call for discipline: “it is important not to over-indulge – two to three cups of Coke and then fill your bottles half Coke and half water.” He recommends a steady pace to Ashton for refueling and then “when the team is ready, go – don’t hang around too long, you are just getting cold and stiff.”

He says “the real race” starts into the headwind at the Breede River Bridge after which it might be incumbent on the stronger riders to drop their pace to accommodate the weaker members of their team. The three infamous climbs after the Bonnievale Cellar can be seen as a moment of truth. “With their concentration gone, some riders will be thinking of dropping out and someone needs to take charge and keep the group together and to remind them to keep eating and drinking.” Legs need to be “saved” for the three climbs left after the right turn towards Swellendam. “Maintain your pace and concentration, climb in easy gears at high cadence and low power. If possible stand every few minutes to stretch the legs and back. Drink on the downhills…and then you’re home!”

It used to be about a top ten finish even if it meant dropping weaker team members. Now the main focus is to start and finish with the same group. “To see a novice in the team change from being afraid and unsure and then to see their confidence and self-belief crossing the line – that is very fulfilling.”

But what really keeps him going?

“It is the one event in the year in which the team is more important than the individual, everyone suffers together and everyone enjoys the satisfaction of completing yet another Double Century.”