There will be no feed zones set up on the route. There will be bike mechanics on the Old Mutual Wealth Double Century route that will only be able to provide basic mechanical assistance to cyclists. It is up to each cyclist to ensure they have enough emergency spares spread across their team members to manage any mechanical trouble. This year, there will also be 4 mechanical support vehicles, kindly sponsored by Old Mutual Wealth, strategically placed at locations along the route. 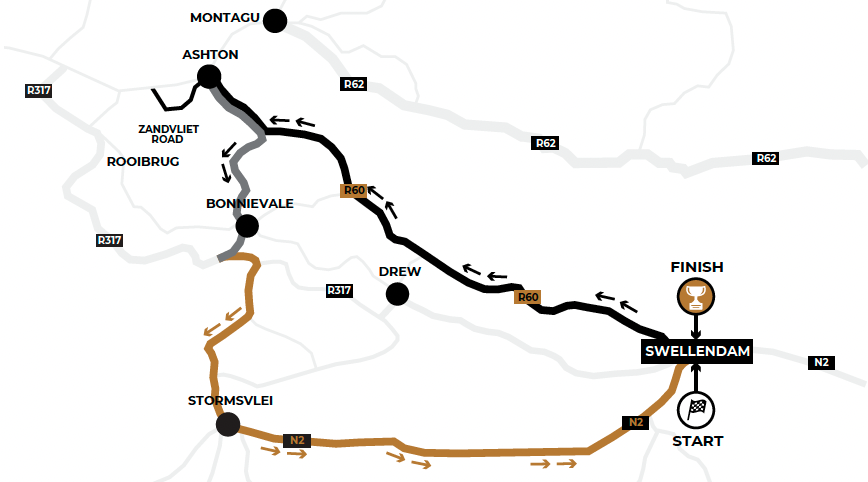 There are two neutral zones on the Old Mutual Wealth Double Century route:

How does it work?

Montagu to Ashton and the Ashton Team Support Zone

From here, you will have up to one hour of neutral time to traverse the neutral zone and meet up with your support vehicle and refuel in the Team Support Zone. No cyclist is permitted to exceed an average speed of 30km/h in the neutral zone between the timing mats in Van Riebeeck Road and the beginning of the Ashton Team Support Zone in Zandvliet Road. Any cyclist found exceeding this average speed limit will incur a time penalty of 30 minutes for their entire Team.

Timing mats between Van Riebeeck Road and the beginning of Zandvliet Road will be used to monitor the average speed. Total time allocated from the start of the neutral zone to the exit of the Team Support Zone in Ashton is one hour. This time will NOT count towards the team’s total riding time if all rules are adhered to.

The team’s time will stop once the team’s fifth cyclist crosses the timing mat at the beginning of the neutral zone in Van Riebeeck Road and will start again when the first cyclist of the team crosses the timing mat at the end of the Team Support Zone in Ashton. Zandvliet Road is closed to public vehicles. Only front-and-back accredited support vehicles will be allowed access.

This section of road is closed to public vehicles. Only front-and-back accredited support vehicles will be allowed access. It will take approximately 30 minutes for the team’s support vehicles to get from the Ashton Team Support Zone to the Bonnievale Team Support Zone. Furthermore, it will take each team approximately one hour to get from Ashton to Bonnievale.

Team support drivers must save the following emergency numbers in their phones for race day:

To report an emergency

When calling with an emergency on race day, please ensure you have the following information available:

You MUST remain at the location of the incident until help arrives!

A comprehensive list of traffic directives on the day, including closed roads, one-ways and stop-go areas.